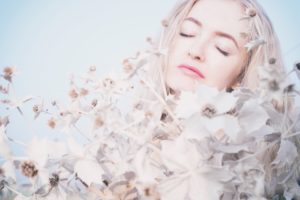 Gray hair is a physiologically implanted process, the usual manifestation of those biological mechanisms that constantly occur in the human body as age increases. Is it possible to prevent the appearance or treatment of gray hair? In most people, trichologists and dermatologists refer depigmentation of hair to one of the direct effects and one of the first signs of aging.

The mechanism of natural hair discoloration

The hair follicle is a complex structure, on the condition of which the growth and natural coloring of the hair depends. It contains melanocyte cells that synthesize melanin. The latter consists of two pigments – eumelanin, having a black-brown color, and pheomelanin yellow-red. The number and different proportions of these pigments provide brightness and a whole range of all existing shades of hair, which is due to the genetic code.

The hair consists of oblong keratin fibers. They, in turn, are formed as a result of the division of the cells of the hair shaft located in the follicular base. During division and development, cell proteins combine with melanin, which they are supplied with melanocytes, as well as keratin, which is also a protein structure.

As cells develop, cells lose their nucleus and organelles, turning into filamentary keratin protein structures (fibrils). All this occurs cyclically, including the production of melanin, and corresponds to the stages of hair growth. There are two types of melanocytes – active, which break down during catagen (stopping growth), and those that are activated during the next cycle of their hair growth. The stock of melanocytes is limited.

Thus, the color that is provided by melanin depends on the color of the root. The outer part of the hair, that is keratin fibers, does not have the property of taking or giving up melanin. In other words, the hair grows gray from the root as a result of lack or absence of pigment. To lose one’s color within a few hours, it can only be influenced by any chemicals, but not as a result of stress, as some people assume.

The inevitability of graying may be due to factors such as:

The appearance of gray hair in men is considered normal in 30-35, in women – in 40-45 years. If gray hair appears in 20 years or even in 25 – this is regarded as premature graying. Most men start to get gray from the chin. In women, gray hair appears initially at the temples, and then – on the parietal and occipital areas.

Some trichologists believe that early gray hair occurs as a result of certain viral diseases, for example, caused by cytomegalovirus. Although it is common, only those with reduced immunity become ill.

It is useless to remove gray hair in the hope that new ones will grow with a normal color, since the same inferior melanocytes remain in the hair follicle. The causes of the appearance of gray hair at an early age are different. Their influence is insufficiently studied and in many respects controversial.

Accelerating and predisposing to early sedimentation factors are:

On the question of the possibility of slowing the appearance of gray hair or returning hair to its original color, scientists now do not give such an unambiguous negative answer, as before. Experimentally, in conditions of cell cultures, the ability of melanocytes of white hair to synthesize melanin has been established. However, the universal remedy for gray hair has not yet been invented. Nevertheless, given the mechanisms, causes and contributing factors, it is theoretically considered possible to slow the processes that affect the graying.

For these purposes it is necessary:

In the case of genetic predisposition, the only reliable way to get rid of gray hair remains masking hair coloring.